Paul Hartley's second game in charge of the Dees saw a second win for the new gaffer as Dundee took all three points back to Dens from Palmerston and saw Dundee's grip at the top of the table strengthened to a 4 point lead. Falkirk lost to Dumbarton and Hamilton beat Raith Rovers which saw them leapfrog Falkirk into 2nd.

It was a 45th minute penalty, converted by Ryan Conroy which saw Dundee win on a ground that has been less happy for Dundee in the past.

QUEEN OF THE SOUTH

Posted by Soccermarsh at 16:13 No comments:

Paul Hartley has admitted that it's a new challenge that he faces at Dens and that he has put himself under pressure to get Dundee promoted.

Speaking at the press conference to unveil his appointment, he said to The Courier:

"“I see it as a challenge. I’m quite fortunate to have been in the same league as Dundee this season, so I know they’ve got a good group of players — and they’re in a great position.

“But it’s going to be a lot of hard work — the players have taken a lot of criticism over the past few months. Hopefully we can give them that confidence and belief. They’ve got a great opportunity to win the league.”
"The expectation is to win the league. That’s why I’m here. I felt it was the right opportunity. I feel I can do well here. And, of course, you want to get back in. There are a lot of good managers out of work."
“Dundee identified me as the man they wanted. When you are out of the game, it’s harder to get back in."
Speaking about the potential that Dundee FC has he said:
"It’s a great opportunity at a good club. Talking about the potential, the fans are already there. We just need to play in a  certain way that will excite them."

Paul was keen to add that he wants to see the team play an attractive brand of football.
"I want to build an attacking team who play positive football, get the fans excited by a team who will entertain."
Paul donned his training kit and was present at Dundee's training session on Thursday, in which he introduced himself to the players and allow assistant Ray Farningham to take training.
Paul has also admitted that he is looking to bring in his own fitness coach and revolutionise the way preparation is done pre matches at Dundee.

His first game in charge comes this weekend in the re-arranged game against third placed Hamilton Accies.

Posted by Soccermarsh at 15:08 No comments:

Hartley takes charge of a Dundee side that sits second in the league, only trailing Falkirk on goal difference and a point ahead of Hamilton. He was in charge of Alloa Athletic for the past two and a half years until he resigned last month, citing that he had taken the part-timers as far as he could. In his reign at Alloa, he led them to back to back promotions and is regarded by many as one of the best young managers in Scotland.

Dundee unveiled the new manager at a press conference at Dens Park this evening. a Statement on the  club website read:

Director of Football Operations John Nelms said “I’m delighted that we have managed to attract one of Scotland’s brightest up and coming Manager’s to Dens Park and his dynamism and forward thinking fits perfectly into our plans for the club”.
Chairman Bill Colvin also expressed his warmest welcome top Paul. “It is a great tribute to the work we are doing at Dens Park that one of the most sought after young Managers in Scotland has pledged his immediate future to us and we look forward to see him apply his talents to our squad”.
Chief Executive Officer Scot Gardiner was happy and relieved to get the deal sealed in time for Paul to take over advance of Saturday’s crunch game against Hamilton. Scot said “I have been working round the clock since I first met with Paul in Edinburgh on Monday night. With John Nelms being in Texas most of our e-mails and phone calls were flying back and forth at 3am in the morning but knowing Paul as I do, I had the feeling all along that we would have the right man to take us into the run in to the end of the season”.

We'd like to wish Paul a very warm welcome to the club and would like to wish him all the best and lets hope is successful in the quest for promotion.

Posted by Soccermarsh at 12:40 No comments:

Dundee FC and John Brown parted company on Monday 3rd February 2014, after nearly a year in charge. Recent results and unrest from the fans resulted in Brown and the Dundee board agreeing that it was best to part company. Dundee FC issued a statement on their website:


"Dundee FC and Manager John Brown have today announced they are to part company by mutual agreement. The Club agreed with John's expressed view that after recent results, this is the best way forward.
John stated that he has loved his time at Dundee FC as a player and as a Manager. He still passionately wants Dundee FC to win the league this season and would share in our pride if we go on to do so.
The Board of Directors would like to put on record their thanks not only for his valiant efforts in attempting to keep us in the Premier League last season when no-one gave us a chance, but also for his hard work and diligence in achieving the current points total which sees the Club joint top of the league with 14 games of the season to go. His work with the youth teams has also seen a dramatic turn-around in the Club's fortunes with the Reserves team also 2nd place and a number of our youths in the running for National honours.
The Club expects to move quickly to appoint a new Manager, to continue the good work by the management and players to date and to and get us over the line as Champions in May.
We urge the fans to continue to support the Club in the superb numbers they have done so far this season."

We'd like to wish John all the very best for the future and would like to thank him for his time, work and efforts.

Photo (c) www.bbc.co.uk
Posted by Soccermarsh at 12:24 No comments:

It was a case of another two points dropped for the Dark Blues as they continued to struggle for form in the first three games of the new campaign.

JOHN BROWN WINS MANAGER OF THE MONTH FOR APRIL 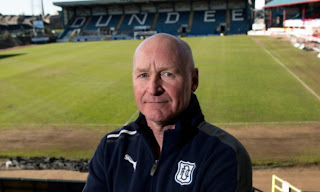 Dundee boss, John Brown has won the Clydesdale Bank Scottish Premier League Manager of the Month Award for April. John replaced Barry Smith as interim boss in February and has led Dundee to a rich vein of form. He has guided the team to only one loss in 7 in the SPL, with 4 victories and two draws. John was given the job on a permanent
basis last week and was handed a two year contract.


Posted by Soccermarsh at 06:16 No comments:

Apologies for not updating this blog for quite a while, normal service has been resumed and updates will be made available ASAP.


Posted by Soccermarsh at 06:08 No comments:

MATCH REPORTS, LATEST SIGNINGS, LATEST NEWS FROM DENS, ALL FROM A FANS PERSPECTIVE.